Children can present with impairments of memory, language, perception, thought, action, and other functions. These cognitive deficits can occur both in multiple domains and as highly selective impairments.

In the last century doctors investigated cognitive impairments in children by clinical and descriptive methods. These methods provided new insights and allowed the isolation of distinct syndromes – Dyslexia being the most frequently and most often quoted.

These discoveries formed the basis for the development of neuropsychology, which is related to the study of the relation between the brain and cognitive functions of an Individual.

Unlike other organizations, which use simple psychometric tests, originally developed for the measurement of either scholastic attainment or occupational guidance using simple intellectual and memory functions the Dyslexia Association of India™ uses specifically designed screening tools for investigating the cognitive functions of children.

The DAI™ uses Neuropsychological assessment which involves the use of a series of tests that are reliable which means that - in the same circumstances they produce the same result-and these are valid - they measure what they are designed to measure.

What most parents in India try not to believe is that there may be no cognitive impairments in their children it usually is the case that these are present and these cognitive functions are best understood by understanding that there is a high degree of functional specialization in our cerebral cortex.

The DAI™ undertakes a modularity approach to the analysis of complex cognitive skills; and identifies selectively the components of the childs cognitive system which may be in deficit.

The human brain is highly differentiated in terms of its functional organisation and there is a juxtaposition of a large number of discrete cerebral organs each sub serving a particular psychological faculty.

We have to appreciate that cognitive skills such as language consist of multi components are localized in different, highly specialised areas of the brain and the brain of a human being is not equipotential with respect to cognitive abilities.

Our first aim is to establish whether the child is functioning at a premorbid level provide a possible indirect measure of the premorbid skills followed by a measure of the present cognitive state of the child. Once the two types of measures are obtained they are compared. These help us understand whether the functioning has changed from a premorbid state and whether what we are seeing reflects organic or functional impairment.

With an organic impairment we need to establish the extent of the change and be in a position to characterise it as global or focal. If the cognitive impairment is focal, neuropsychological measures are used to specify more precisely the cognitive impairments. There is an attempt to understand the impairment and whether it is indicative of lateralized dysfunction or confined to the anterior or posterior regions of the brain. In exceptional cases, we have the means to document highly selective cognitive impairments with a known and relatively precise anatomical localization.

Ideally a cognitive profile would be constructed from performance on tests of proved validity and comparable difficulty and cutting edge screening tools like NEPSY-II, WRAT, WJ, WISC, WMS, etc to name a few would be used. An example assessment or screening for a specific child would take into account factors such that a profile like what is represented below would emerge and the parents and school would be provided specific strategies to assist and help the child. 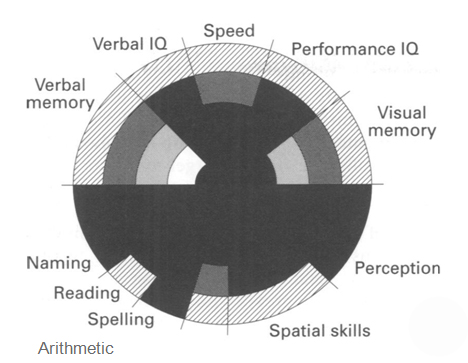 When we screen for language we bear in mind that language is not a unitary function. We use the most useful dichotomy and consider spoken and written language separately. Spoken language can be characterised as a collection of independent components, each of which is associated with different brain structures. We separately advise on main central linguistic components of phonology, syntax, and semantics.

Our neuropsychological assessment allows the description and evaluation of the major cognitive deficits we notice in children and which are indicative of possible neurological and neurodevelopmental issues and may indicate possible neuroanatomical correlates of the cognitive impairments. Our neuropsychological assessment can, at the very least, provide pointers as to whether there is unilateral, bilateral, or subcortical damage and the parents can follow up with a medical doctor after that.

Parents may not be aware, but neuropsychological assessment has a key role in differentiating between organic and functional disorders.

The sheer volume of neuropsychological knowledge that we have on the organisation and fractionation of cognitive skills is nowadays highly developed. Crucially, the way in which the cognitive functions can fractionate often diverges from the common sense opinion of how a cognitive function can break down.

Thus we can assess the childs pattern of performance and conclude and interpret it as neuropsychologically convincing or unconvincing.

To make a booking or contact us please call +91 8826022886 or e mail us on info@dyslexiaindia.org.in and we would be there to share and guide you on what to do.